2009 WonderCon weekend yielded not one, but two amazing events at the Isotope!  On Friday night, Darick Robertson hosted a Tiki Tour and on Saturday night we tripped the light fantastic with featured guests Brian Azzarello, Dave Johnson, and Jill Thompson!  But before I get to recounting the epic moments of those two nights, let me share with you the group of amazing people that not only grounded my Wonder Con experience, but are a source of support and validation, my dear comrades in arms, the Writers Old Fashioned!

Writers Old Fashioned is my San Francisco crew.  We hang out whenever our hectic lives and schedules allow, talk about our projects and have a few drinks (although that usually means tea for me).  These folks understand that creating art is about building each other up.  We listen to each others dreams and schemes and we encourage each other to make them reality.  It’s really a blessing when you can trust your friends to give you their unvarnished opinions regarding your work.  And it helps that these kids are wicked clever (the barbed wit of Jason McNamara alone can slash a man to ribbons in mere seconds).  Their feedback and constructive criticism isn’t just appreciated, it’s vital.

This year Writers Old Fashioned greatly benefitted from the take charge leadership of Emily Stackhouse.  She initiated and organized WOF’s involvement in this year’s WonderCon and motivated many of us to bring our best game to the table.  Anyone who’s been in a leadership position knows how hard it is to get things done, especially with a group of uniquely diverse individuals.  I compare this kind of task to herding cats, and let me tell you, dear reader, that Catwoman’s got nothing on Ms. Stackhouse.  Meow!

The Artists Alley Writers Old Fashioned booth was my home base for WonderCon and I am grateful to all of our members who worked the table, because I really didn’t.  I showed up to put my cards on the table (but Emily and Matt already had them out for me;  extra special thanks to Matt Silady for picking my cards up from the printers!) and I stashed my purse under our table, but that was about all I did.  When Matt and Emily weren’t working the table, Josh Richardson and David Brothers held it down!  In fact, Emily knew I was going to be volunteering for Prism Comics and took some Princess Witch Boy postcards to the folks at that booth before I arrived at the Con.  It was super awesome to show up for my shift and point to my cards and be all like, “That’s me!” to the Prism Comics guys.  Thanks, Emily!

Let’s all raise our glasses (or tea cups) in a toast to Writers Old Fashioned!  Check us out and make sure to read the recent posts by Emily and Danger Bob (as seen in this picture taken by CHUNK)!

Here’s Josh Richardson and David Brothers taking care of business at the booth (Photo taken by yours truly). 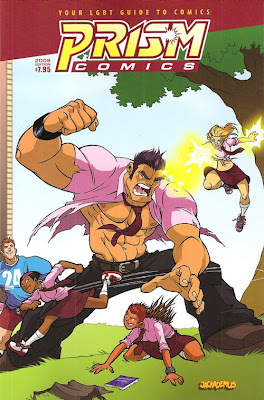 Writer and artist Justin Hall asked me if I’d be interested in volunteering for Prism Comics and I jumped at the opportunity to mingle with Queer comic creators!  I’ve followed Prism’s exploits since it was established in 2003 and love their annual resource guide:  Prism Comics: Your LGBT Guide to Comics (Which is available for sale on their site).  When I met Zan (aka Charles Christensen) at a Radical Faerie gathering many years ago, I had no idea that one day I’d get to work alongside him promoting comics!  Besides being famous for one half of the Wonder Twins, Zan is also founding member of Prism, the writer for  The Mark of Aeacus, and quite simply a joyous force for all that is good, just and fabulous in the world.  In this video, Zan interviews me about Prism Comics.  This was completely off the cuff, folks.  I had no idea that he was going to put me on the spot like that,  so be kind.

So, was it ironic coincidence or a sly tip of the hat from DC Comics that they chose to place a gi-normous wall hanging of Wonder Woman only a few feet away from the Prism Comics booth?  Either way, it was awesome to have Terry Dodson’s version of Diana looking over us the whole convention.  Sappho was certainly not suffering at this Wonder Con!

It was very exciting talking to con attendees about Queer comics and creators and I got to mingle (if somewhat briefly) with Ed Luce, Paige Braddock, Brian Andersen, Robert Triptow, Mark Padilla, and Johnny Nolan!  Please check out their respective projects and support them however you can! 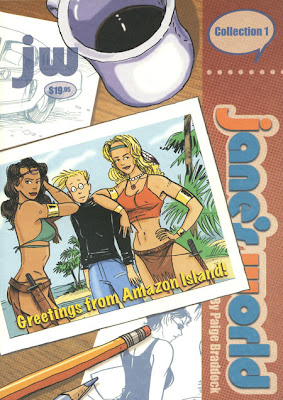 Many thanks to Prism Comics volunteer organizers Ted Abenheim, Sean McGrath, and David Paul Brown for all of their hard work.  Thanks also to the volunteers and creators and con attendees for making me feel right at home!

Next:  I talk about the Tiki Tour and how it almost killed me…I just need to get my hands on some photos first!  Thanks for your patience!