In the early 1970s, Allan and Roberta Ehrlich co-founded The Third Eye and produced an assortment of blacklight products. Among them were blacklight posters featuring Marvel super-heroes. Today we are taking a look at three of them specifically featuring the art of Jack Kirby

END_OF_DOCUMENT_TOKEN_TO_BE_REPLACED

Today we celebrate the artwork of Yildiray Cinar, an artist from Istanbul, Turkey.  Although Cinar works for DC Comics (currently penciling The Legion of Super-Heroes), today we look at the art of many (and I mean many) Marvel characters he drew for Rittenhouse Archives.  Usually, Storm Sunday focuses solely on our weather maven (and she’s in here, I promise), but she’s going to share the spotlight with her Marvel Universe compatriots.  I will list the names of the characters for the uninitiated, but comments will be sparse as we let the art speak for itself!  If you have a favorite, let me know in the comments.  Let’s go!

END_OF_DOCUMENT_TOKEN_TO_BE_REPLACED 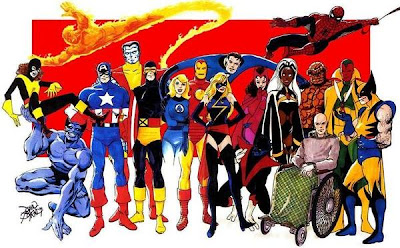 After Dave Cockrum, John Byrne is the artist who really shaped the way the X-Men looked in their All-New, All Different incarnation! He started on issue #108 in 1977 and worked his magic for many years. In fact, John Byrne’s influence can still be felt from his runs on The Fantastic Four, Captain America, The Avengers. So, what better way to celebrate the man and his legacy than the above image which combines all of the just mentioned titles into one happy Marvel “photo op” ?

From left to right, Kitty Pryde (perhaps around this time she was Ariel or Sprite) is being balanced by Beast, that’s the Human Torch flying above them, next to Beast is Captain America, Colossus, Cyclops, the Invisible Woman, Iron Man, Mr. Fantastic, Ms. Marvel, Scarlet Witch with Nightcrawler in front, Storm, the Thing, Professor X is seated in front, behind him is the Vision and next to him is Wolverine and of course, that’s everyone’s friendly, neighborhood Spider-Man above them! 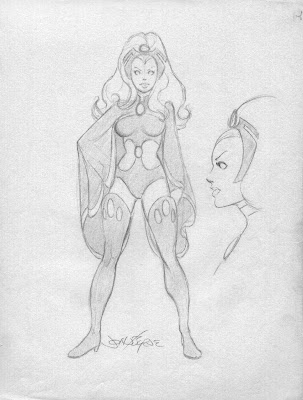 A lovely pencil sketch of Storm by Byrne. His rendition of the wind rider just bubbles over with circular design. From the curls of her hair to the oval cutouts in her boots, this Storm is one curvy woman and I love it! She looks healthy, sexy and powerful. I especially love how high Byrne drew her hair, like it’s almost made of clouds. And check out that profile! This should be the model sheet from which other artists draw inspiration! 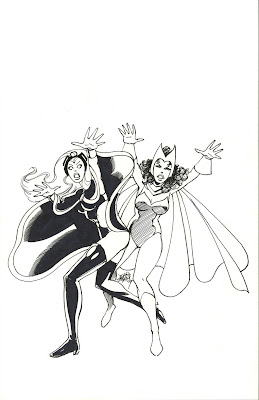 John Byrne drew a run of The Avengers (#181-191) while pencilling X-Men. Here we have the hex-casting Scarlet Witch with Storm! You gotta love those boots with the low heels, so late seventies! 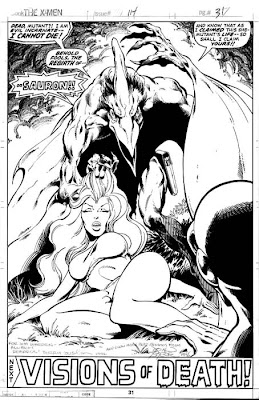 Hipalicious Storm in the clutches of energy stealing Sauron during one of the X-Men’s many visits to the Savage Land. Remember, Storm was fulfilling the token girl role on the team here and although her character was draw with a lot of sex appeal, she was still being portrayed as the naive “stranger in a strange land” character. 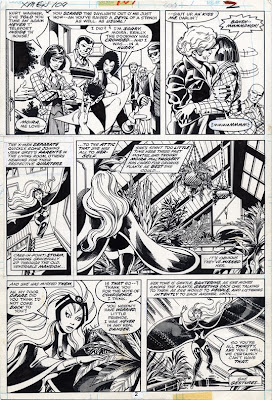 Storm talks to her plants in her attic apartment, a character trait that really endeared me to her. I was jealous that she got to make it rain inside. Check out Banshee an Moira being all lovey-dovey. *sigh* I love that couple.