One of my favorite series is The Champions. Yeah, it didn’t last very long (17 issues), but it had the most eclectic lineup! I mean, Ghost Rider, Black Widow, Angel, Iceman and Hercules! How many other comics had a demi-god, a Russian spy, a supernatural biker and two mutants? None. This lineup is replaced as my favorite much later by The New Defenders which had Angel and Iceman plus Beast, Valkyrie, Moondragon, Gargoyle and Cloud (as well as appearances by Hellcat and Son of Satan). You can Google all of those peeps on your own, dear reader, but here’s two amazing covers by Kevin Nowlan to whet your appetite.The above image is by John Byrne and George Tuska. If you scroll on down, you can see the full page that it’s taken from. You gotta love how Darkstar is just tossing the clothes to the ground while she changes in mid-air. Um, girl, your powers are summoning palpable darkness, remember? You don’t have to do that. You could summon a disk of darkforce and toss your clothes in the Darkforce Dimension or teleport there yourself and come back in costume. I bet Laynia’s just flustered by Ghost Rider’s rudeness. She’s certainly internalizing in this panel. 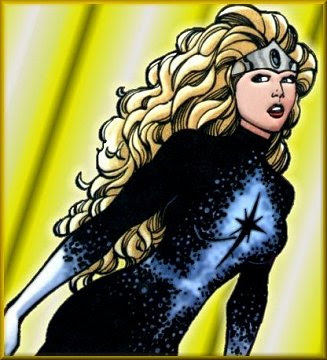 Darkstar first appeared in The Champions #7 (written by Tony Isabella & drawn by George Tuska) along with a task force from the USSR (consisting of her brother Vanguard and Ursa Major) to bring Black Widow back to their homeland. Instead, she turned her back on the Soviet Super Soldiers and joined the Champions. From the moment I first saw her wield her darkforce powers I fell in love with her just like Iceman did. Things didn’t work out for Laynia and Bobby, but astute readers already know about Iceman’s difficulties in sustaining a meaningful relationship (see Judy Harmon from his first appearance, Zelda, Lorna Dane, Opal, and recently Mystique).

Anyway, this post is supposed to be about Darkstar. Why do I love her? Well, first of all, there’s her power set. Her mutant connection to the Darkforce allows her to create energy, to make that energy solid, to teleport and to fly. She’s like a Green Lantern without the ring and Nightcrawler without the stench. Second, I love the tiara. Darkstar joins the list of tiara wearing characters that are near and dear to me such as Snowbird, Storm, Scarlet Witch and the Enchantress. Third, her relationship with her brother Vanguard is intriguing. I liked to think about what it would be like if I was able to be a superhero with my sister. Their relationship seemed really solid to me. Fourth, the color of hair is unique. I used to draw with Prismacolor pencils and the closest color I could find when I drew Darkstar was called ecru. Not white, not blond, but something else altogether. It’s even more fascinating when you realize her brother has red hair. Fifth, the costume. It’s clean, simple and elegant. The star design is classic. They really messed it up when they made it all bubbly later on (with the white color instead of the ecru that matches her hair). 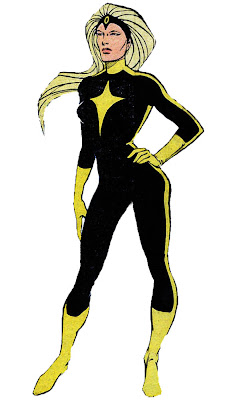 I wish I could find some scans of Darkstar as drawn by Marc Silvestri from The X-Men Vs. The Avengers mini-series. That was a great mini until Silvestri was taken off of issue 4 to work on Uncanny X-Men. No offense to the artist that pencilled that last issue, but I had fallen in love with those pencils and it hurt my adolescent heart a little to see him go. He just made Darkstar look so, what’s the word, witchy. I like it when energy directing characters have really interesting Dr. Strange-ish spell-casting hands and Silvestri does that really well (He would go on to refine what I’m talking about with Storm, Dazzler and Madelyne Pryor, especially in Inferno). 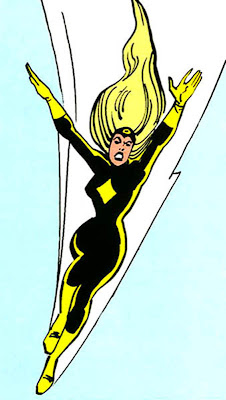 Well, the title of this post says the most important thing about Laynia that really sucks. She’s dead. For years I’ve made sure I picked up any comic book that Darkstar and her Soviet friends made an appearance in and I was so excited to hear that she was going to be a member in the X-Corporation and written by Grant Morrison, no less. And then in some really murky artwork, she’s possessed by an entity and killed by a pompous French assassin named Fantomex. Seriously. I mean, I couldn’t even tell what was happening in those pages. And they buried her in Paris! I know that’s the division of X-Corporation that she was working for, but why wasn’t her body sent to Russia? Where was her brother? 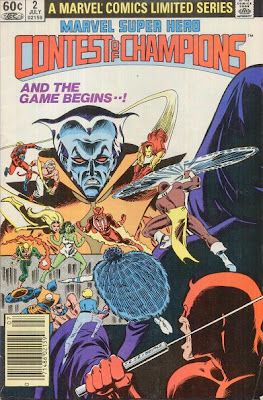 Someday I will have to search out this Contest of Champions limited series and and see how Darkstar fares against her opponent. Anyone got any reading copies they don’t want anymore, let me know. Oh look, there’s the back of Israel’s champion, Sabra (she’s the one that looks like she’s a mass of blue quills). This cover’s composition is not the best. Of all the perspectives that could have been drawn, we have to look over the shoulder of the robed figure (Death?)

So here we learn that Ghost Rider might have Asperger’s Syndrome. I love how Angel is making excuses for him. It was interactions like these that made reading The Champions fun. 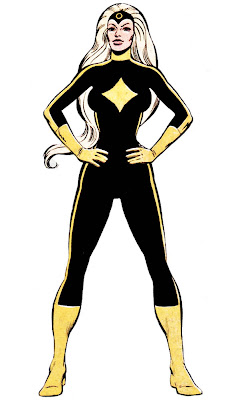 So, now that Laynia has been replaced by a redhead, the likelihood of seeing the original Darkstar return from her unceremonious death is close to nil. However, I was pleasantly surprised to discover that this week’s Wolverine: First Class (#7) has a tale featuring Darkstar and her brother Vanguard in part one of a two part story! So, thank you Fred Van Lente!

It still sucks that any stories about Laynia will have to be set in the past though. I guess I’ll have to go reread her old adventures. Anyone got a complete run of The Champions?