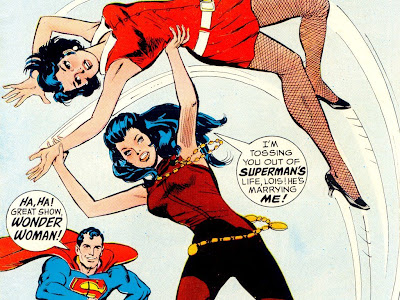 Wow.  Last time we looked at Wonder Woman’s “Mod” era, she wasn’t tossing Lois Lane around like a ragdoll and claiming dominion over Superman.  What in Hera’s name is going on?  Has Diana gone mad?  Well, this image is not actually from a Wonder Woman comic.  The scene occurs in Superman’s Girl Friend, Lois Lane #93.  A very fine read it is, too.  That is by fine I mean hilarious.  It’s also very beautifully rendered.  However, dear reader, I must relate to that in order to fully enjoy the high camp art form that is Superman’s Girld Friend, Lois Lane, one must read it aloud with a group of friends, with or without a few cocktails.  Only when this comic is performed as Comikaraoke*  will you discern its true purpose.

I love that for once it’s Lois, not Zatanna or Black Canary who is wearing fishnets.  And with some sensible shoes, too.  They’re like flats, but they have a bit of a heel to them as well.  Lois’ onepiece mini-skirt combo with the wide belt and matching collar is really suiting her and one must really appreciate the way her hair moves when she’s being thrown around.  That hair flip is still looking sharp in the presence of imminent danger!  It’s a nice contrast with Diana’s long hair which is stylishly pulled back (This is perhaps my favorite era of Di’s hair).  It screams Barbarella, especially paired with the jumpuit and chunky jewelry.  This is simply fashion heaven for me and I hope, dear reader, that it brings you a little joy as well.  I urge you to seek out the collected trade paperbacks of Diana Prince Wonder Woman for yourself.  The writing by Mike Sekowsky will entertain you and the art of Dick Giordano will thrill you.  Besides, don’t you want to know the story behind this incredible catfight?  Superman seems to be cheering on Diana’s rampage which might at first seem out of character for the Man of Steel, but longtime comic readers probably know that this is certainly not an isolated instance of Superman acting like an ass.

*Yes, I did just coin that term, but I think it fits quite nicely, even if we’re not talking about singing the comics, but one must open the definition of karaoke to include the idea of “performing ” the comic chosen in its most theatrical manner.  I mean, if we’re gonna get technical, the word comes from the Japanese words : kara, void, empty + oke(sutora), orchestra (from English orchestra).  So, I suppose it would be more appropriate to call it a Comichorus, referring to the ancient Greek word “Chorus,” defined as of group of actors that “serve as major participants in, commentators on, or as a supplement to the main action of the drama” (Dictionary.com), but whatever.  I was trying to be clever but now I’m not so sure the word combination was worth all this explication.  Regardless, Comikaraoke is also a wonderful pastime for the new Dark Avengers comic (or any Marvel comic with Norman Osborn in it).  Go read some comics with your friends.

Wonder Woman Wednesday: Goodbye to the Past!

Wonder Woman #179 (1968) cover art by Mike Sekowsky and Dick Giordano.  In this issue Diana’s mother reveals that the Amazons have to leave our dimension to renew their powers.  Diana opts to stay behind, losing her Amazon abilities.  However, she quickly learns martial arts, opens a boutique and starts wearing super-hip all white costumes with major mod flair!  More information can be found at Barry Keller’s Pop Thought.

I chose this image because it reflects how I’m feeling these days.  It’s a meme for creating a new self in the age of a newly elected government leader and a dying economy.  In many ways it feels like the magic that informed my life has had to leave the world to recharge and I must reinvent myself to adapt to the challenges ahead.  I just realized how ironic it might seem to find empowerment in a storyline in which the lead is dis-empowered, but I think it’s great that Diana chose to stay in our world when she could have gone with her Amazon sisters and retained her status as an Amazon princess.  She felt called to adapt herself to a new way of life in a world that she wanted to help change.  That’s the lesson I’m choosing to learn from this story.