We recently celebrated the amazing Thor illustrations by Charles Vess from Marvel Fanfare #20. That same issue also contains some gorgeous artwork by Carl Potts featuring the luminaries of the Marvel Universe of 1985 such as The New Defenders, Doctor Strange, and Power Pack!  That’s his rendition of the Hulk above.  Run, puny humans, run!  Let’s take a look at the rest of the “Pottspouri”, shall we?

END_OF_DOCUMENT_TOKEN_TO_BE_REPLACED

You’ve seen his amazing art cards on Storm Sunday and you’ve marveled at his Doctor Strange, now feast your eyes upon Yildiray Cinar‘s rendition of runaway super-heroes Cloak and Dagger!  Tyrone and Tandy look fearsome in this image.  It’s rare that Cloak looks like more than a ticked off head inside a sheet, so I am loving how Cinar chose to show Ty’s hands.  The extra folds of fabric above his shoulders give him an imposing stance and Dagger’s form is curvaceous while still athletic.  I love the simplicity with which her hair is depicted.  Amazing work!

Marvel Fanfare Monday was only supposed to last through September, but I simply cannot pass up the chance to share some more pinup gems with you from that short-lived series!  As always, click on an image to see it larger!

Terry Austin gives us a serious take on Cloak and Dagger (not that they were really ever happy go lucky) with this image from Marvel Fanfare #18. I like how he uses the white of Dagger’s outfit as a design element that contrasts with the darkness of Cloak’s hand.   This is simplicity and elegance in one amazing portrait.

This Punisher pinup by Mike Zeck from Marvel Fanfare #45 spotlights Frank Castle posing in front of a wall of graffiti.  Zeck is often remembered fondly for his work on Punisher as well as “Kraven’s Last Hunt,” and Secret Wars (he and Rick Leonardi designed the black Spider-Man suit).  I loved his work on G.I. Joe as well!

Sandy Plunkett‘s rendition of Scarlet Witch is beyond fierce!  Surrounded by animals in the wild, she is a force with whom to be reckoned!  This image is from Marvel Fanfare #45, the all pinup issue!

Colossus is bursting through Russian words in this image by Rick Leonardi (also from Marvel Fanfare #45).  There’s an amazing gallery of his art here.  I especially love Leonardi’s work on The Uncanny X-Men, New Mutants and Cloak and Dagger!

Check back next Monday for more pinups from four different Marvel Fanfare artists!

Cloak and Dagger strike a pose reminiscent of Dirty Dancing in this illustration by designer Ken Steacy. Perhaps Dagger took ballet before she ran away with Cloak? I don’t remember their origin clearly.  I do like Cloak’s stoic stance in contrast to Dagger’s pirouette.  You get a sense right away that these two are partners even if you aren’t familiar with their relationship.

Power Pack wrecks a diner!  Steacy does a great job communicating each character’s personality through body language and props.  The dragon detail in the background is amazing! I wonder if that man looking over the booth is Steacy or a friend he drew in the picture.  Steacy’s attention to detail can even be found in his signature which is stylized to fit the Asian restaurant theme.

Guardian from Alpha Flight flies high!  Salute!  I’m going to take a wild guess and place this image before the time that good ‘ole James Hudson blows up (the first time).  Oops! Spoilers from the 1980s!  I like this image.  It’s clean, slick and powerful.  I like the juxtaposition of the planes with Guardian, but I wonder if instead of flying with them, he’s really just in their way.

The Fantastic Four are a family that just happens to be the world’s most amazing superheroes too!  Here we get a small slice of home life as Reed and Sue return from a night out and find their son Franklin perched on the Thing’s knee.  Franklin is, of course, reading about his family’s adventures in a comic book!  How meta, yes?  Check out Sue’s hair!  That is a serious 80s flashback!

Doctor Strange enters a strange dimension where everything has turned into a slick advertising campaign!  Okay, that might not actually be true, but that’s what it looks like to me.  From the hyper-stylized face of the woman in the background to the pattern on the green suit of the man in the foreground, this world looks like a Nagel painting got smashed up with Lisa Frank stickers and an Atari video game.  The good Doctor’s expression is one of bewilderment as if even he cannot fathom this strange ad world.   I enjoy Steacy’s take on Doctor Strange.  He really nails the cloak details and the image on his shirt.  The hair is a bit too slick for my tastes, but that’s my only quibble. 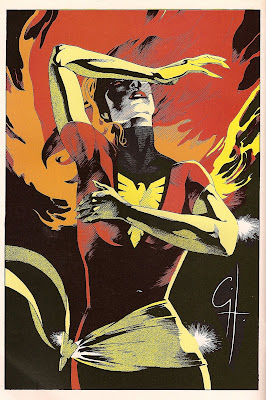 Craig Hamilton knows characters.  His portraits of superheroes pare down each character to their most classic elements.  Take Dark Phoenix for instance.  The dramatic arrangement of her arms is perfect for a character of her tumultuous history.  The weight of her power bears down heavily on her as her fiery aureole majestically engulfs her.  This is a woman consumed by her own intensity.

Click on any of the images to view them larger!  Then you can better enjoy Hamilton’s amazing linework! 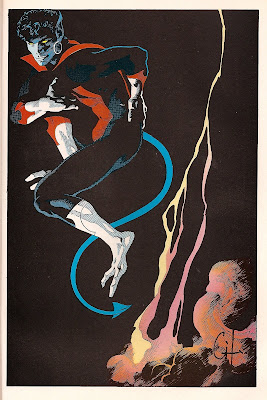 Nightcrawler is a charming man despite his unusual appearance.  He channels his hero Errol Flynn in this image with a swashbuckler bent to his body language (The hoop earring is also a nice touch).  I love the added detail of the fading smoke from his recent teleportation. 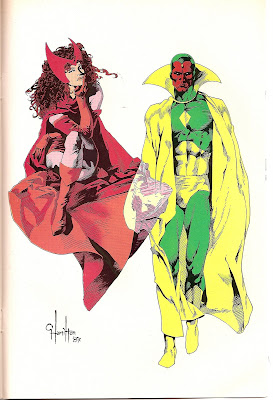 The Scarlet Witch and the Vision used to be quite the power couple before a few dismantlements (him) and mental breakdowns (her) left their relationship in shambles.  I prefer to think of these characters in their classic forms from this time.  Wanda is looking confident but contemplative (a far cry from her recent depictions) and the Vision stares with glowing eyes that reveal his android nature.  I love that Hamilton chose to emphasize the etherealness of both characters by having Wanda floating and the Vision phasing. 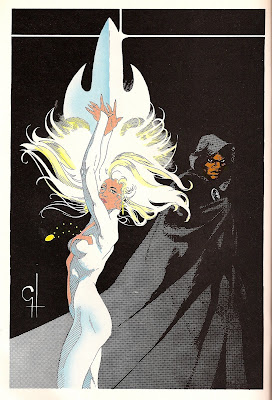 Hamilton’s version of Cloak and Dagger is stunning, truly representing the core essences of Tandy and Tyrone’s struggle with their respective super-powered polarities. 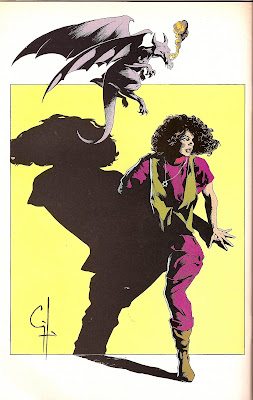 Lockheed hovers above the intangible Kitty Pryde (Shadowcat).  Kitty has always struggled with a costume that works for her and most people do not refer to her by her Shadowcat codename since she has gone through so many, so it seems appropriate to have her depicted in regular clothes for her portrait. 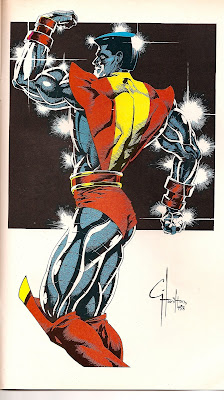 Colossus shows off his organic steel muscle definition in a rare display of exhibitionism.  Usually, Piotr is quiet and reserved, slow to anger but a powerhouse when tested.  Colossus (alongside Nightcrawler and Storm) are among the most unique and iconic of the All-New, All-Different character designs. 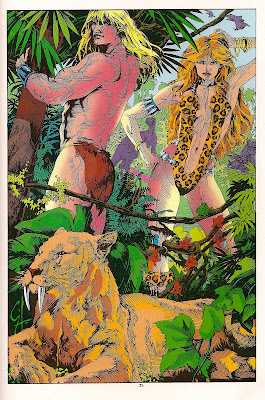 Ka-Zar, Shanna the She-Devil and Zabu relax in their Savage Land home.  There’s a little something for everyone in this amazing illustration.  Ka-Zar isn’t usually depicted so beefy, but I have no complaints.  Everything about this piece from character to composition works for me. 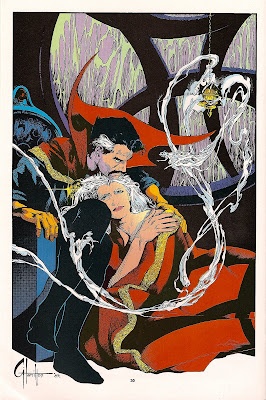 I saved my favorite for last because it showcases everything I love about Craig Hamilton’s work.  Not only is he true to the characters’ designs and histories, he creates the most beautiful arrangements in which to place them.  The multiple layers of setting (rain on the window, the windowpanes, the figures,the fabric & the smoke from the incense burner) give the artwork depth and density which an esoteric character like Doctor Strange really needs.  Also, Hamilton excels at presenting the natures of the relationships of characters to one another.  Clea is Doctor Strange’s disciple, but she is also his lover.  Even if this is your first time viewing these characters you can tell that they have something very special together.

The spotlight shines on another amazing artist on next week’s Marvel Fanfare Monday!