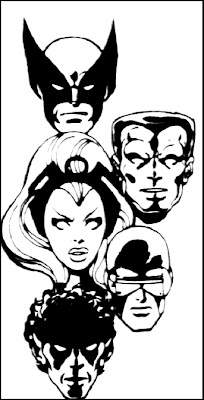 This Sunday I just can’t get enough John Byrne X-Men goodness! Comics used to have headshots of the characters in the upper left hand corner and boy, I really miss that. I mean, look how unique the faces are for these characters. If you have never seen them before, these folks are eye-catching and I think it helps to promote them on the cover like this! Notice how no one has pupils? Isn’t that cool? Stacked on the left are Wolverine, Storm and Nightcrawler. Stacked on the right are Colossus and Cyclops. 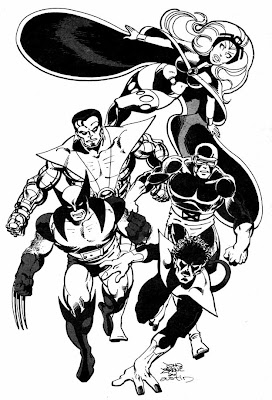 And here they are in full figure fighting action! This is the X-Men I know and love (throw in some Angel and Banshee and I’m in heaven!). Look at how different everyone’s body types are: beefy Wolverine, hulky Colossus, lean Cyclops, gymnastic Nightcrawler and babe-alicious Storm! This is a team of archetypes that other team books draw from (I’m not saying that the X-Men were the first to use these archetypes, they were around way before then, but they made it famous): Strong guy with heart of gold, serious leader with something to prove, funny acrobatic guy, berserker tough guy hunter and token female/earth goddess. 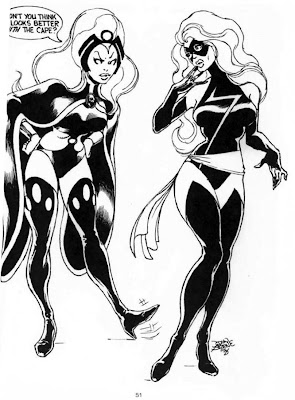 “Don’t you think it looks better with the cape?” Storm confronts Ms. Marvel about the similarities of their costumes. But as cute as this lil drawing is, most heroines around this time had bathing suit costumes with thigh high boots. It’s a superheroine tradition that continues to this day. The weird thing is, Storm has been sporting Ms. Marvel’s “S” swoosh since her costume got updated in the 80s and now the Marvel Adventures Avengers Storm has completely swiped it (without the sash). 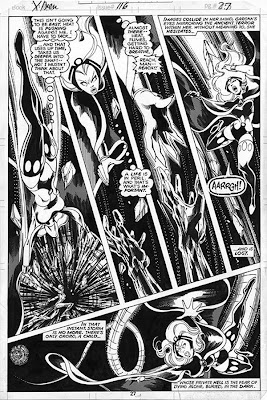 I wanted to show a dynamic page layout by John Byrne showcasing his ability to give a sense of danger and momentum to Storm’s attempt to save Garok the petrified man (and he’s the villain! This is when we were learning about Storm’s appreciation for all life, even if you’re a dried up husk of evil who has tried to kill her). 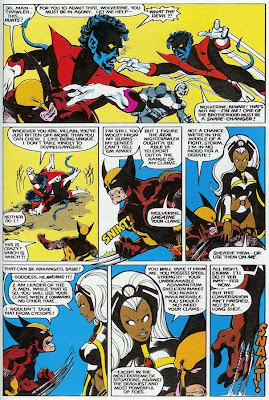 Storm shows Wolverine who’s boss. Actually, from the get go, Storm is shown to have a calming influence on Wolverine. He obviously respects her authority. I’ve long seen Logan as the Hunter/Horned God aspect of divinity while Ororo represents the Goddess. They are two sides of the same coin, imho, representing the pinnacles of absolute feminine and masculine entities. Some of this complexity has been lost over the years in these character’s depictions, but they still retain the core of these concepts.