This Storm Sunday we look at three awesome images by three awesome artists!  First up, we have Olivier Coipel (who also drew an amazing gatefold image for the House of M series).  This commission from this year’s Toronto convention is simply stunning!  Storm does look a lot younger than I am accustomed to seeing her portrayed and she is supermodel runway thin, but I think it all works.  Love the white highlights depicting lighting (lightning?).  I looked for a definitive website for this superstar artist, but didn’t come across anything substantial (even his Wikipedia entry needs massive updating).  I enjoyed his early work on Legion Lost and his most recent run on Thor.

Bob McLeod is no stranger to comics, having worked on a number of projects since the early 1970s.  I learned about him from his work on the New Mutants graphic novel and first three issues of the ongoing series.  His version of Storm (above) is classic curvy Ororo (a la John Byrne).

Marko Djurdjević has been creating covers for Marvel for years after gaining recognition and notoriety for his redesigns of the X-Men.  Now he is known for creating definitive X-Men images like the giant poster above  (click on it for a much larger view).

In 2009, he published a book detailing his Marvel art.  Comic Should Be Good has some great examples of Djurdjević’s pencils and painted work.  Djurdjević has drawing videos on YouTube and his art DVD, Character Ideation, is now available as a download.  I love his Warlock redesign.

Storm Sunday: “…I Have Total Control Over My Abilities…”

Before I comment on today’s featured artwork, I would like to take a moment and thank you, dear reader, for taking the time to read this blog! Whether you are a Facebook friend, a Twitter follower, or a diehard X-Men fan, I appreciate you stopping by! I especially would like to thank those of you who take the the time to leave comments! Thank you to Ken Kneisel, Cynjon, Akeeko, Astra, Scarlett, Ted, Ingonyama, Phil Green, Jake Fritch, Emily Stackhouse, Ryan Haupt, Gregorio, Jeysu, DAX!, Cassandra, Norah, Aaron Frey, David Salomon, CHUNK, Diego Gomez, Kevin Patterson, Juba Kalamka, Mrs. Finney, Afghanant, Yabette, CGeezy, Greg, Cosmic Falcon, Simonn, Wubing, Richard MacKinnon and anyone else who I am forgetting! Your interaction with stormantic means a lot to me!

That said, let’s reminisce about the All New, All Different X-Men, back when the new characters were still mysterious and fresh!

It is strange to me to “hear” Storm calling someone a “fool,” especially Colossus, but she was quick to judge Piotr’s actions in this page’s first panel from Giant Size X-Men #1.    I like to think that since all life is precious to Storm and she thinks Colossus is being rash that she couldn’t help but call him a fool in a mothering kind of way.  It’s cool to see Thunderbird and Cyclops team up because I like how Thunderbird is having the same negative thoughts about their situation except he’s actually stating his misgivings while Cyclops keeps them to himself.  I really liked Thunderbird and his death had a big impact on me when I read these stories as reprints in Classic X-Men.  Artwork by Dave Cockrum.

Unlike the original 5 students of Xavier’s the new crew already know how to use their powers, needing little in the way of training.  Working together as a team, well that’s another story.  I love this page from Uncanny X-Men #98 because it shows the reader that Storm is quite capable of utilizing her powers in amazing and effective ways.  “…I have total control over my abilities…'” she tells Cyclops after she wreaks havoc on a Sentinel.  I miss seeing Storm portrayed like she is in panel 4, with her hair and cape flowing upwards.   And just like the page before, this one ends with Cyclops freaking out.  I never get tired of Cyclops losing his cool.  Artwork by Dave Cockrum.

When Marvel and DC Comics decided to merge their respective universes into one, they created Amalgam Comics.  This issue starred Storm as Wonder Woman and was written and drawn by John Byrne with inks by Terry Austin.  I enjoyed the story which placed Ororo on Paradise Island as a sister to Diana.  It’s worth checking out if you come across it.  I do like the combined visual of Ororo’s trademark cape and Diana’s accoutrements.

Kitty and Storm have a heart to heart–in the sky, naturally–after Storm changes from den mother to punk rocker.  It looks like artists Paul Smith is the artist of this issue of  Uncanny X-Men #180, but it is actually John Romita, Jr. inked by Bob Wiacek.  I remember reading this issue  and realizing I had never read an exchange like this one in a comic book before.  It brought me to tears thinking about the concepts Ororo and Kitty were discussing.  I had only read about identity, change and love like this in novels before.  Interpersonal relationships like this one were what kept me enthralled with the X-Men for a long time. 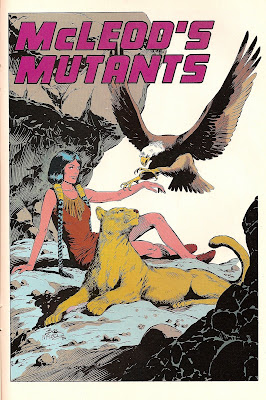 My re-reading the entire run of Marvel Fanfare this past week has me energized about a lot of characters that were prominently featured around Marvel’s 25th anniversary.  The images from today’s post come from Marvel Fanfare #27 and are drawn by New Mutants co-creator, artist Bob McLeod!  Click on the artwork for the actual size of the scans.  Above, Danielle Moonstar communes with nature.  The former co-leader of the New Mutants looks positively divine as befits a character who went on to become a Valkyrie!  I would love to see that power returned to her in the recent relaunch of the New Mutants (written by Zeb Wells). 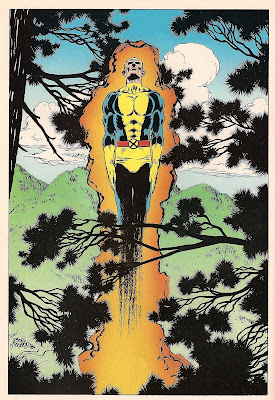 Here’s Cannonball, the other co-leader of the team, blasting off in the forest.  I love the composition of this piece.  The tree branches serve as a framing device, spotlighting the kinetic powers of good ol’ country boy Sam Guthrie. 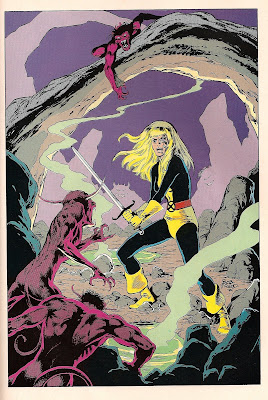 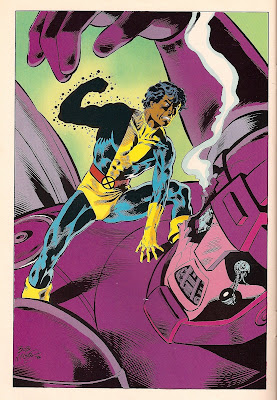 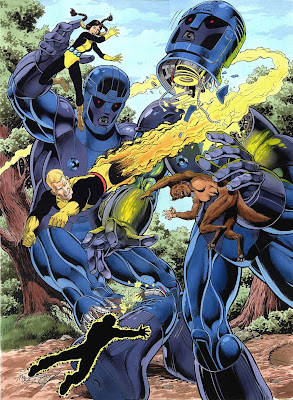 The above image is a commission by Bob McLeod that I found while lurking on the X-Men Message Boards of Comic Book Resources.  There’s always some interesting discussions to be found there.

Check back for more amazing pinup goodness as I post my favorite artists drawing my favorite characters from the pages of Marvel Fanfare!

Alex Ross channels his inner Bill Sienkiewicz for an upcoming cover of a new New Mutants title.  I am loving this cover, (especially since it has Cypher!) but it really needs Karma in it for the win (and yes, I know she wasn’t around much for the era that this image is tapping into, but Xi’an was one of the first five members and I love her).  The good new is that Zeb Wells, the writer for the series, has big plans for Karma and is going to center the first arc around her!

Bob McLeod pencilled the graphic novel and the first three issues of The New Mutants (first series).  His art will be gracing the cover of the one of the upcoming issues of the new series!  Awesome!