Seriously, what Storm said.  My apologies for being late.

These last three weeks have been rich with activity for yours truly, dear reader.  WonderCon chewed me up and spit me out and it’s taken me this long to get back to regular online activity.  Specifically, I found myself reevaluating all of the projects in my life and how to get to the heart of what matters most to me.  I feel that this blog which started out as an homage to my favorite superheroine has now evolved to being more personal.  Certainly, my opinions and ideas about Marvel’s Merry Band of Mutants have always been expressed with a heartfelt honesty, but they have always been relegated to the comics world, not so much my own.  Once I started to put out buzz about Princess Witch Boy, I felt a shift.  I realized that I needed to work more on promoting my work and not as much about a character that is owned by a corporation.

X-Men is a franchise.  It’s a giant marketing machine and frankly, I find myself almost always disappointed with how my favorite character is represented, whether it be movies, cartoons, video games or the current comic books.  So, instead of bitching about that (astute readers may have noticed it is not my style to hate on others’ works on this blog;  that’s something you’ll have to hear in person), I’m putting my energy toward the things I can affect.  That means working on my own characters.  That means making comics. 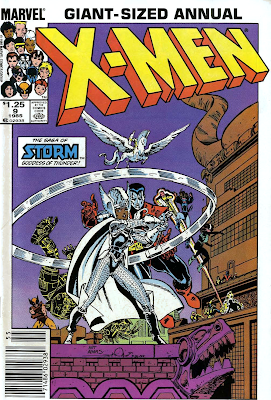 My secret cache of Storm images is almost spent, and  I no longer search the internet every month to find new images.  Yes, I read anything with an appearance by our favorite weather witch (and I scour Previews for her, trust), but I don’t think every appearance deserves a mention on this site.  There’s simply too many iterations at this point.  Which Storm are we following?  Is it the one in Astonishing X-Men, Black Panther or Uncanny X-Men?  They are not the same character, dear reader.  Warren Ellis, Reggie Hudlin and Matt Fraction are simply not on the same page (pun intended) when it comes to writing Ororo.  She say and/or does things in one comic that do not make sense when read in another (sometimes in the same month of publication!).

Also, the days of the X-Men being their own corner of the Marvel Universe are over.  Now we have microcosms within microcosms, crossovers and more crossovers.  Look at the above cover to X-Men Annual #9.  At the time, this title and New Mutants was the only way you got to keep up with Ororo’s adventures (Yes, I know about the infinite guest star appearances that the X-Men made–and continue to make–for sales, but this is where you followed the happenings of this character).  Do you see how many characters are crowded into that upper left hand corner box?  That was the extent of the characters that X-Men comics included at that time.  If that was done today the whole cover would be awash in a mutant multitude thanks to all the characters populating the X-verse.  Too much.

However, I do recommend that you check out these previews for Astonishing X-Men in which Storm kicks major butt!  See?  I’m still paying attention, and I will be sure to pass on things I deem important to share.  Warren Ellis’ writing on Astonishing definitely counts. 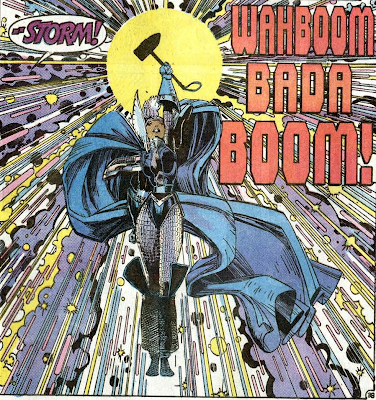 So, now that I’ve got things back on track, you will be seeing Part III of my WonderCon report, a lengthy essay on my experience cosplaying as Black Widow at said convention, and much more.  Sunday posts will alternate between being about Storm of the X-Men and yours truly, STORM.  Who knows, you might get a mix of both.  Nothing like a little gust of Weather Goddess in your Princess Witch Boy or a dash of Princess Witch Boy in your Weather Goddess, right?