A few readers were wondering about the context of the Marc Silvestri drawn panel from The Uncanny X-Men panels that I used last week.  So, I’m presenting three pages from that issue (#244) for your enjoyment.  This issue is entitled “Ladies’ Night” and is the first appearance of mallrat Jubilee! 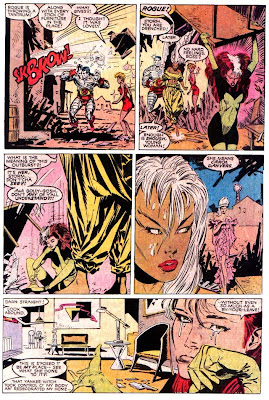 Rogue throws a tantrum because she’s sick of having to share her body with Carol Danvers (who apparently has time to redecorate her room in between X-Men missions).  I love seeing spindly Rogue picking up furniture and tossing it around.  You gotta love that Australian Outback hideout where no one cares if you wreck the place.  That stuff wouldn’t fly at the X-Mansion. 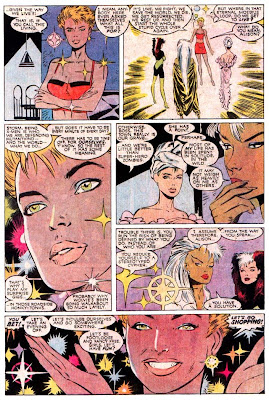 Dazzler proposes that they all take a break and stimulate the economy.  Methinks Dazzler looks quite lovely all tan and sparkly. 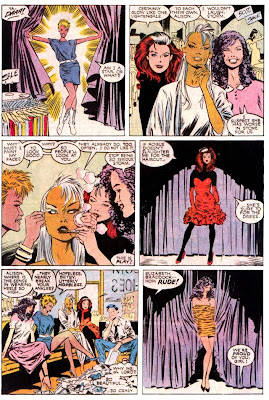 I’ve skipped ahead a couple of pages and yes, this page is dedicated to super-heroines trying on new outfits.  No super-menaces here, folks, unless you count high-heeled shoes.  It does seem odd that Elisabeth is questioning the point of wearing them since she used to be a model, but who really understands Psylocke anyway?  I kid, I kid, I used to love some Pyslocke once upon a time.