The Entire Cast of She-Ra: Princess of Power! 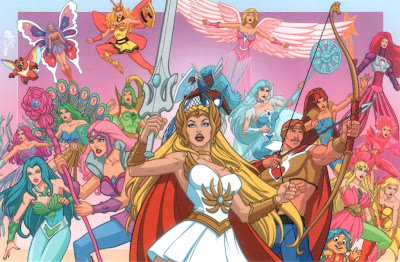 Who doesn’t love She-Ra?  She’s like Barbie with a broadsword.  How is that not cool?  I didn’t watch the show as avidly as say, G.I. Joe or Super Friends, but I loved it whenever I got the chance.  I remember really liking the Catwoman rip-off Catra and the only dude on the show, the hunky archer (named Bow as it were).  I’m loving this image because it showcases every character in She-Ra’s cast.  love the peacock lady (Peekablue) and the lady with the pink feathered wings.  Go ahead and say it loud, you know you want to:  “For the honor of Grayskull!  I am She-Ra!”