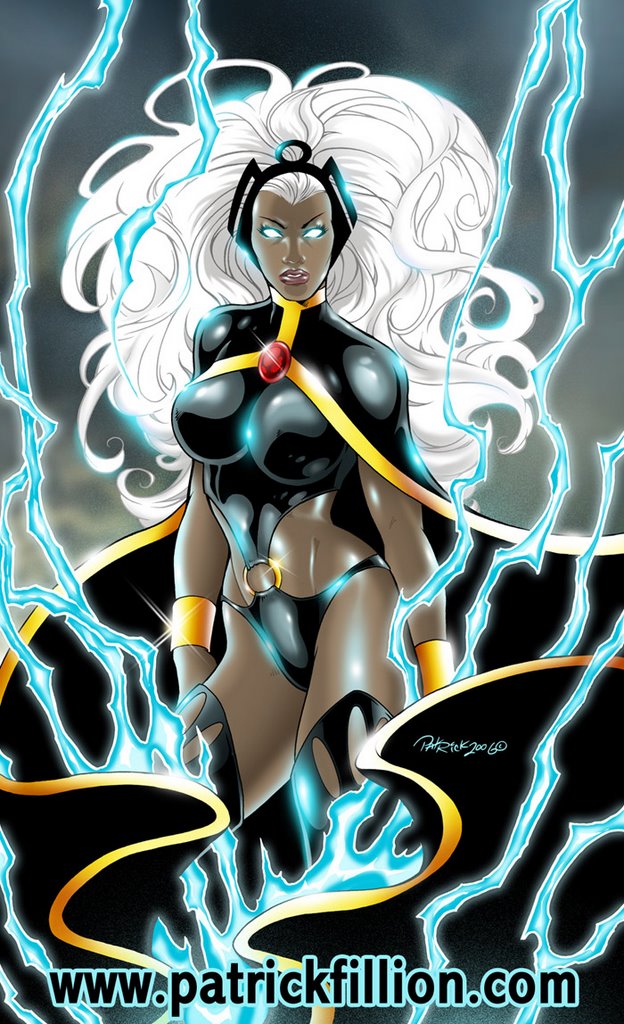 This week Storm Sunday proudly presents artwork by artist Patrick Fillion who is almost as big as fan of Ororo Munroe as yours truly! *smiles* Actually, I think Patrick could give me a run for my money when it comes to true fanaticism of our lovely Goddess! Like me, Patrick fell in love with Storm at first sight and that moment opened up a world of comics fun for him. We also agree that as lovely as Halle Berry looks, Angela Bassett would’ve been a better choice to depict Storm in the movies (She was asked, but decline the three picture deal, so we got Halle). We are also both big fans of Storm’s classic Cockrum uniform and her punk rock outfit.

I’ve followed Patrick’s blog (BOYTOONS Magazine) for a while now (as well as Artistic License & Class Comics in general); Simply put, I am a huge fan of his work! Note: Much of Patrick’s work is Mature Art depicting (hot) gay sexuality. If you click on the links I’ve embedded in this post, you are agreeing that you wish to see such subject matter (And why wouldn’t you, regardless of your erotic tastes, his work is amazing!). However, as you can see from the amazing art of Storm gracing this post, not all of Patrick’s art is overtly sexual. I encourage you to check out his Women of Marvel series featuring Snowbird (Yay!), Invisible Woman, Scarlet Witch, Wasp, She-Hulk and Spider-Woman!

In his Women of Marvel series, he also has some sketches of Storm’s costumes when he was thinking of which version to draw and he has line art and colored art of Storm in punk rock phase and in her white costume (sort of the X-Men cartoon show version and Jim Lee’s version merged into one).
I’m a big fan of Patrick’s clean crisp lines and his dedication to perfectionism regarding the human form. I know his figures are always super-endowed (His Storm does tend to be bit too bust-centric for my tastes, but he gives her great curves everywhere else). His characters span the range of comic genres. Space Opera, Super-Hero, Astronaut, Supernatural, Sword & Sorcery, and more (!) are represented in his creator owned works. And while I haven’t met Patrick in person (yet!), I have to say, I’ve been more than impressed by how he takes the time to personally respond to the comments people leave on his blog. Patrick is also always promoting other artist’s works. I’ve found about some great artists by reading his blog. His enthusiasm about his love for comics is infectious! Oh, and he loves the White Witch as much as I do, too (from the Legion of Super-Heroes)!
Patrick has a new comic coming out this May about a barbarian (a la Conan) named Zahn that I an really looking forward to. He reminds me of DC Comics’ Warlord with his white hair, but we get to see Zahn in ways I could only dream about when reading the adventures of Travis Morgan!
Give Patrick Fillion some internet love and check out his sites! I think you’ll discover some great art and get to rub virtual shoulders with a great guy as well!
BOYTOONS MagazineClass ComicsPatrick Fillion