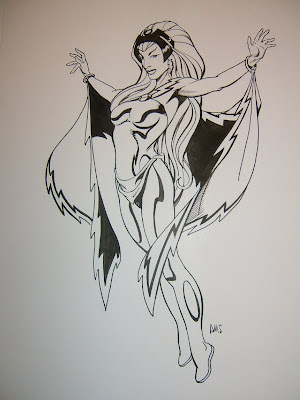 Paul Smith took over the pencilling duties on Uncanny X-Men after Dave Cockrum‘s departure. His run lasted from issue #165 through #175 (with the exception of #171). For a comprehensive list of Paul’s comic-related work visit his wikipedia page. His animation background is evident in his style of drawing, especially his creator owned work, Leave It To Chance (written by James Robinson). There’s a nice cover gallery of some of his work here and a very cool drawing of Storm here. This image above is Smith’s version of the costume designed for Storm by Alan Davis.

One item of interest regarding Paul Smith’s version of Storm is that he drew he with a wider nose. Seems not that big a deal maybe, but Smith’s Ororo actually had some African features to her. Most artists draw her the same as any other Caucasian female superhero, almost as if there’s some kind of face template that they use in hopes that the costume and the colorist will help the reader differentiate who’s who. And even though Smith followed Cockrum on the title, he didn’t quite capture the exotic qualities that Cockrum imbued Storm with. However, Smith’s clean economical lines gave Storm a softness that and strength that matched Chris Claremont’s storylines. Paul Smith also got to debut Storm’s punk rock mohawk look which was a radical departure for the character in terms of attitude and appearance. 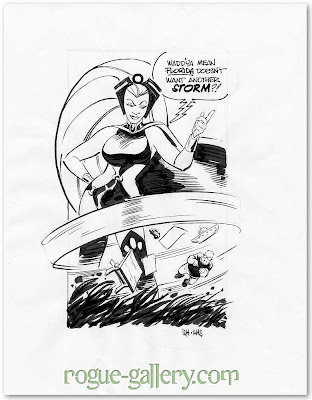