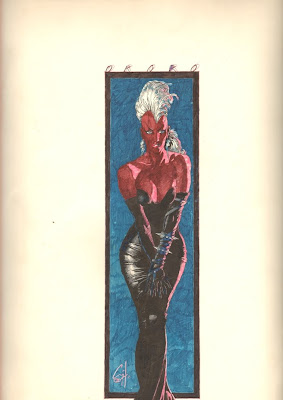 I remember picking up an issue of Marvel Fanfare simply because it had Angel on the cover and being pleasantly surprised to discover that the second story starred Storm! The first story was written by Ann Nocenti and drawn by David Mazzucchelli and the second one was written by Chris Claremont and drawn by Craig Hamilton. It featured a punk rock mohawk Storm meeting with Mystique to discuss Rogue’s future. The story took place before Storm was hit with the neutralizer that stripped her of her powers (which was meant for Rogue). In fact, we learn that Mystique (through the help of her partner Destiny) knew that whoever tried to help Rogue (who had run away to Mississippi) would suffer the fate meant for her. Mystique, of course, did not reveal this to her hated enemy Storm. I remembered loving the art and wished I could find more than just pinups (like this one of Scarlet Witch & Vision) in the back of future Marvel Fanfare issues. My online searches did not come across much online presence for Craig besides this Art Gallery and this YouTube video interview.

The above drawing is unique because it’s a marker sketch and it shows Storm in an evening gown with opera sleeves like you’d expect from the Black Queen. The addition of the punk bracelets is a nice touch because it adds an edgy element to the elegance of the fashion. I also like how Craig chose to title it “Ororo” instead of “Storm,” making this drawing more of a character study than superhero portrait.
AngelBlack QueenMarvel FanfaremohawkpunkRogueScarlet WitchVision