This Sunday we take a look at two images from the amazing Michael Wm. Kaluta!

This image is from The Uncanny Dave Cockrum Tribute book.  I really dig the ying/yang Nightcrawlers in the center of Storm’s lightning tinged fingers.  Storm’s face has a more androgynous look here, her nose is a bit more Greco-Roman and her lips have a more pronounced curve to them (especially the upper lip).  Her cheek bones are higher and her chin has a bit more prominence, giving Ororo a more classical look.  Also, notice how her tiara is depicted much smaller than usual above the forehead, but it extends in front of her ears to her cheekbones.

Though Storm is prominently featured in this image, the focus is really on the double Nightcrawlers, who look more demonic than ever.  By giving them more realistic anatomy and hunched, almost fetal-like posture, Kaluta has emphasized Kurt’s (the Kurts’) otherworldly mutant nature.  The realistic drawing style, combined with the metaphorical imagery makes Marvel’s mutants look rather mystical. 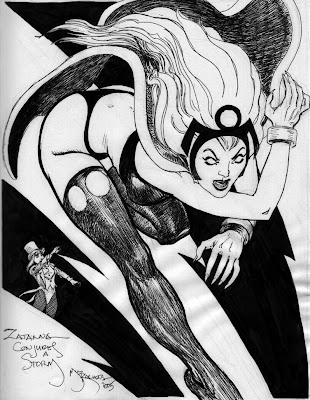 Speaking of mystical natures, here’s Zatanna “conjuring a storm” by Kaluta. I’m not sure if it is intentional or not, but Storm’s detailed hands with their long sharp nails and her rather angry face remind me of Ororo’s time as a thrall to Dracula.  My intuition tells me that Kaluta probably just wanted to draw her full of weather witch intensity.  She definitely looks ticked off!  This image is a nice DC/Marvel crossover moment as well as a cute pun and it’s always great to see Zatanna!