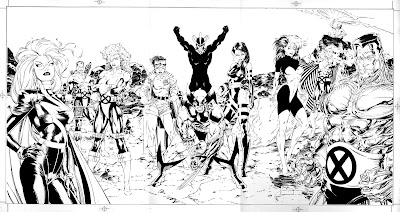 Jim Lee & The X-Men.  Those two names conjure up many amazing images and fond memories for me!  I’ve briefly mentioned before how influential this run was to me and I’ve even featured this exact image before (Storm Sunday:  Jim Lee, Part II) but as three separate pieces.  Here is the triptych in its totality featuring the X-Men’s Outback Era (They used to hide out in Australia when they were pretending to be dead.  It’s a long story).  From right to left you have Storm, Forge, Polaris, Jubilee, Wolverine, Havok, Psylocke, Rogue, Banshee, Gateway and Colossus.  Click on it and all of the images below to see them larger.

What was so great about this era?  Well, I really responded to the slick lines of Jim Lee.  There was a lot to be admired in his supermodel women (the poses alone could knock the chrome off a bumper) and beefcake men.  There is a heightened sexuality to his characters that adds a real life dimension for me.  Lee’s X-Men practically exude confidence and a superhero needs to look empowered (pun intended).  I think Lee was able to give each character a larger than life persona which suited the soap opera and gladiator elements of the title.  His action scenes are kinetic and stylized fun.  Yes, a lot of his characters look the same.  Yes, sometimes we get a hot shot of characters posing at the expense of storytelling.  Yes, his anatomy isn’t always correct.  I simply don’t care.  Jim Lee comics are sexy and fun, ‘Nuff said. 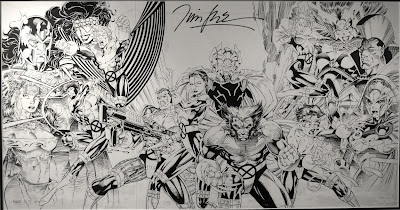 This fabulous gatefold cover from Uncanny X-Men #275 features a veritable Who’s Who of Marvel’s mutants!  On the right we have Rogue, Magneto and Zaladane in the background.  Gambit, Banshee, Forge, Psylocke, Professor X, Wolverine, Jubilee and Storm strike action poses in the middle. Deathbird, Gladiator and Lilandra frame the right hand side.  This was an exciting time for the X-Men with stories spanning the Savage Land and the far reaches of Shi’ar space. 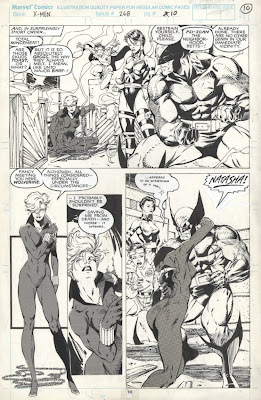 The Black Widow guest stars in Uncanny X-Men #265.  This issue features Wolverine, Psylocke and Jubilee after their near deaths at the hands of Lady Mandarin (a brainwashed Psylocke). 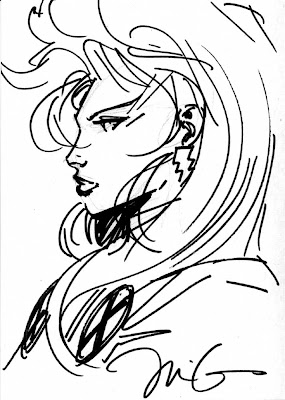 A convention sketch of Storm by Jim Lee.  I love the loose lines he uses to define the hair.  There’s a feeling of implied movement as if the wind is blowing around her.  The strong profile (especially under the chin) serves as focal point for the drawing and Lee totally gives Storm the little character details that define her (X badges, lightning bolt earrings and  streaks on the sides of her eyes). 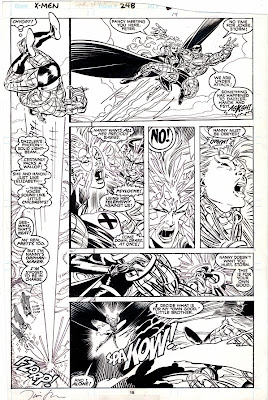 A page from Uncanny X-Men #248.  Storm shows once again there are consequences to those who try to possess her (which longtime readers of Claremont will recognize as an often used meme for our Windrider).  After Nanny uses Psylocke to brainwash her teammates, she tells Colossus, “I decide what if for ‘my own good’ little brother.” 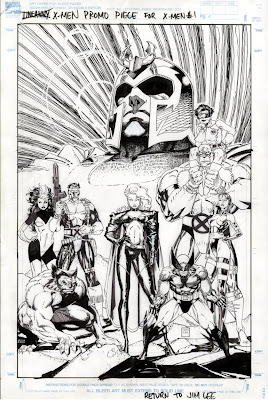 I saved my favorite for last.  This image was used as a promotional image for X-Men #1.  Storm is featured front and center in an outfit and hairstyle she never wore in the regular series.  I would have like to have seen it used.  You don’t see many asymmetrical haircuts on leading ladies and I think Lee’s redesign of the bodysuit for Storm is pretty bold, combining the punk and more classic looks she’s had over the years.