I first discovered Craig Hamilton in issue #40 of Marvel Fanfare and instantly fell in love with his rendition of Storm!  I remember being a bit confused because this story was not presented in Uncanny X-Men and yet was still part of continuity (It actully explains an untold story before Storm lost her powers and features the nasty Mystique).  I was a bit upset that there hadn’t been some kind of note in the letters page of Uncanny X-Men to inform me about this extra feature!  I started to get a bit paranoid that perhaps other stories of Storm were being told elsewhere as well!  This image is the back cover of Marvel Fanfare #40, probably because Storm’s story is told second.  The first story features Angel and is written by Ann Nocenti and drawn by David Mazzucchelli!  That cover really caught my attention due to Mazzucchelli’s bold linework and since Angel is my favorite character after Storm I immediately grabbed it!  After flipping through it and discovering Storm’s story and Hamilton’s amazingly lush and detailed artwork, I was in heaven!  I felt like this issue had been created especially for me!

Tomorrow I will share with you, dear reader, the cover and one page from Nocenti and Mazzucchelli’s Angel story as part of Marvel Fanfare Monday!  This new feature will only be up for the month of September (Yes, we are starting a day early!  How generous is that?!) as I celebrate the month of my birth!  Go Virgo! 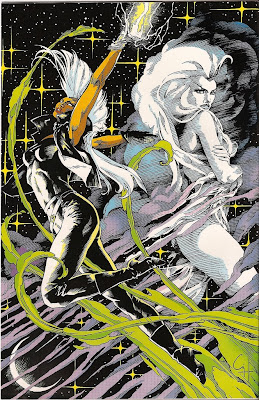 If you like this image enough to want it in its original form, click on this smaller image to enlarge it.

Check out this splash page!  Having Storm’s face hidden in shadows really adds to the mystery and grandeur of the character!  The shape of the clouds imply so much movement, giving a kinetic quality to the overall story.

The mutant goddess descends ever so gracefully from the sky!  Check out the closeup of Ororo’s face!  The level of detail is simply breathtaking!

Storm enters a club to meet with the nefarious Mystique about Rogue.  Mystique’s trap for Storm is already set before Ororo even walks in the door.  She knows Storm is too noble to do anything less than what is right and unfortunately that is why Mystique has the upper hand in this story.  I’ve always liked Storm’s feud with Mystique and am sad that Mystique has become more of a foil for Wolverine these days.  I’m not going to post any more pages but it is worth your while to check out this underrated issue for yourself!

Craig Hamilton has a gorgeous art gallery posted at ComicArtFans which I highly recommend that you visit!  His Aquaman and Cosmic Odyssey pieces are two of my favorites!

Storm Sunday: A Portrait of the Goddess as a Young Thief