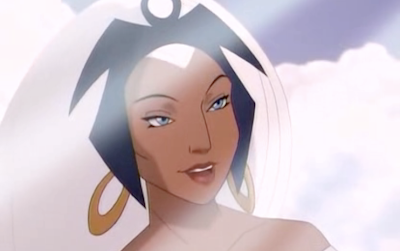 I’ve been thinking about the Wolverine & The X-Men cartoon and its brief flirtation with the pairing of fellow X-Men Storm and the Angel.  As Angel is my favorite male team member of the X-Men (and was my first superhero crush), I am more than intrigued by the idea.  I like the possibilities that the interaction of an untouchable goddess and a milliionaire playboy could bring.  Storm could teach Angel something about being more grounded, and Angel could help Storm loosen up a little.  When you see them flying together in the “Guardian Angel” episode, there’s something majestic about these two beautiful people simply enjoying their powers.  You won’t get any more spoilers than that from me!  You’ll have to watch it for yourself! 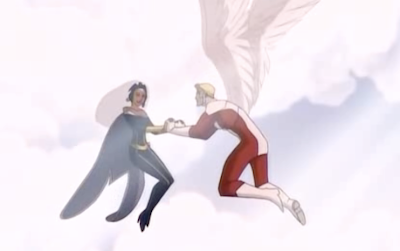 In the comics, this relationship was briefly touched upon in a backup tale in a Classic X-Men issue which shows playboy millionaire Angel (Warren Kenneth Worthington III) aggressively hitting on Storm (Ororo Munroe) who is new to the United States and the superhero biz (as well as interpersonal relationships).  They never date, but they do share a lot of adventures together, many of which take place in the Savage Land.  Besides, at this time, Angel is still crushing hard on Jean Grey and flips out on Wolverine for hitting on her.  Oh, the drama!