WonderCon 2009 coverage concludes as I present some more snippets from Saturday and Sunday of the convention!  On Saturday morning, I dressed as Black Widow and hung out all day with my buddy Sam Harris (British Spider-Man) and the irrepressible CHUNK (Spider-Wrangler).  That night, Isotope hosted a party commemorating Brian Azzarello and Dave Johnson’s amazing work on 100 Bullets, an amazing crime noir series (that just ended with issue #100 *snif*).  Super scribe Azzarello and Artist auteur Johnson hung out with fans all night and much merriment was had by all!  Above, I pose with James Sime (Isotope Proprietor) and G.A. (Isotope Trainee).  To see some of the amazing cover art from 100 Bullets by Dave Johnson, click here.

Here I am holding my sketchbook in which Dave Johnson drew a sketch of yours truly.  I love love love it.  I look very glamour goblin. 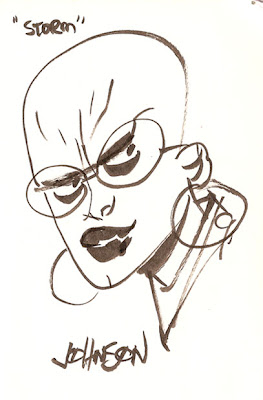 A closeup of the sketch.  To see more Isotope staff portraits by Dave Johnson click here.

Here we have from left to right, IDW‘s crown jewel, Ben Templesmith, Pirate’s Press‘ CHUNK, and The Boys‘ Darick Robertson!  CHUNK is hella happy as he poses with his favorite artists.  Isotope makes dreams come true.

(As Ben Templesmith was leaving the party much later in the evening, he told a partygoer, “Nice to meet you!  Sorry I called you names!”)

I had promised Joe Casey the night before the party (at the Tiki Tour) that I would bring in my X-Men card deck and give him a tarot reading.  This picture was taken immediately after his reading.  Joe signed my sketchbook with the words, “STORM is wise.”  Well met, Joe.  Couldn’t have said it better myself. 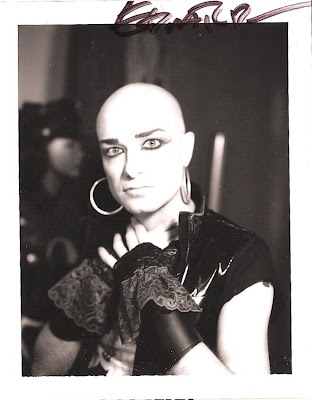 A photographer took this photo of me during setup for the party.  He didn’t leave his card, so I cannot properly credit him, but perhaps you can decipher his scrawl at the top of the picture?  No?  Me neither.  Anyway, he used a real shutter and light and whatever that stuff is called.  You know the kind of camera that looks like an accordion?  That kind.  He was all about trying to get the light just right and I think he succeeded.  Of course, he had a real model to work with.  Makeup by yours truly (left over from Black Widow drag earlier in the day).  Lacey gloves created by Yabette of Swankety Swank.  Earrings from Multikulti.

CHUNK and Darick Robertson waste no time getting to know each other  better.  Darick is such a great guy that he donated a lot of his time signing at The Hero Initiative booth at WonderCon.  He’s that kind of a guy.  Cool, big-hearted and hella fun to hang out with.  As evidenced in these pictures.  Dontcha just love that hat Darick is sporting?

The best thing about CHUNK?  He doesn’t drink, so you know his behavior is not alcohol influenced.  It’s all natural, baby.  100% unvarnished junk-talking CHUNK.  No wonder he and Darick got along so well.

So, yeah, it was an awesome weekend.  I have to give shout outs to the guys at BOOM! Studios, Filip Sablik from Top Cow, the iFanboy guys, Gary from Comics Outpost, and one of my favorite creators, Wendy Pini!  However, the one person who I haven’t mentioned yet, who I stalked when I was working at the Prism Comics booth, and who was on hand at the 100 Bullets party sketching and signing for her adoring fans, was the inimitable comics creator, Jill Thompson.  Jill was a grand and glorious presence at the Isotope, infusing the lounge with her fierceness!  Such was her majesty, I felt a bit like Ganymede to her Hera, doing my best to making sure she was comfortable at the party as she sketched at the drawing table.  I have already shared the amazing Wonder Woman sketch she drew for me, but now it is my privilege to share something more life enriching (Not that one could not live on her art alone, you could–but sometimes it takes something more quotable to change one’s life).  So now, without any proper ado I present to you:

THE WISDOM OF JILL THOMPSON

I had a few moments of alone time with Jill, and after I praised her for her work on Scary Godmother and Magic Trixie, we had a discussion about the challenges of working with the public.  I told her that my mantra revolved around socializing with compassion, kindness and grace (Something I picked up from a Yogi tea bag).  Jill looked me straight in the eyes and said this to me:

“The world is a giant set piece.  I decide what costume I am going to wear.  I play to the back of the house.  And I have one hell of a stage whisper!”

Thanks to Jill Thompson and to everyone I interacted with at WonderCon 2009.  Keep on rockin’ the comics!

May Day! May Day! Floralia at Swankety Swank this Friday!